The Cake: I ate up this play and so will you 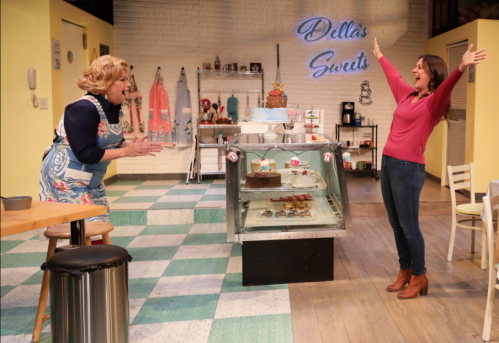 Last week I wrote a post about Boston Lyric Stage latest production, The Cake, and after seeing the show, I wanted to encourage you to get tickets to see if for yourself, but if you need further reason, read The Boston Globe’s review, Humor and humanity are the icing on The Cake.

The Cake uses humor to address a subject that has been grabbing headlines for years. Despite the fact that we’ve all heard more than we probably care about individuals using religion as an excuse to deny service to LGBTQ community, to watch the drama unfold on stage is more compelling than you might think and thanks to the excellent script and solid cast quite funny to watch as well.

I found it very hard to dislike Della, a traditional Southern baker who has a crisis of conscience when her deceased best friend’s daughter, Jen asks her to make her dream wedding cake for her and her future wife. Della is not unlike many millions of Americans who fail to see the hypocrisy in their selective interpretations of The Bible which on one hand condemn homosexuality and in the next condemn people who eat shellfish, pork, etc…  But her love for Jen (or Jenny as she calls her) compels her to reexamine some of her long held beliefs.

Make plans with a friend or another couple and get tickets before it closes on February 9th. Like me, I’m sure that after you see the show, you’ll never look at a pile of mashed potatoes quite the same way again.

The Cake
January 10 – February 9, 2020
Click here for more information or to buy tickets