Last month Sergio and I traveled through parts of Argentina and spent 5 nights in beautiful Buenos Aires at the Park Tower Hotel in the Retiro neighborhood; near Puerto Madero and adjacent to Recoleta. This was our second visit to the city; our first visit to B.A. was back in the early 2000s.

Above you can see some photos of Sergio posing in front of a Pride flag in a public park, Obelisco de Buenos Aires and the Casa Rosada which translates into the Pink House and is where the President of Argentina resides.

There were some things we wanted to revisit like the Recoleta Cemetary  (shown above) where prominent families from B.A. are buried – Eva Peron among them; going back to the Floralis Genérica or the Tulip as I kept referring to it (shown below) and we wanted to spend more time in the Palermo neighborhood. 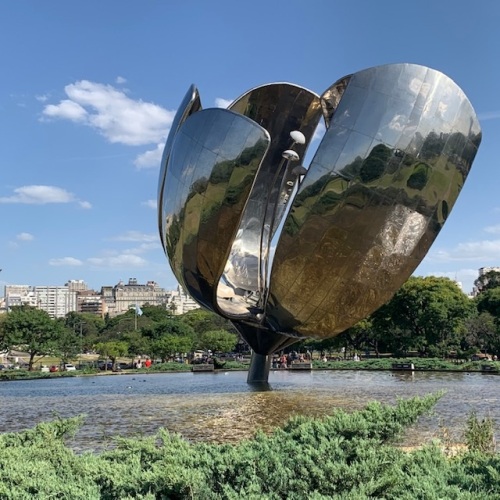 To make the most of the beautiful weather, we made a conscious decision to spend as much time as we could outside spending time in favorite neighborhoods and visiting many gorgeous parks.

Below are some of the many photos taken on our visit. I could probably write an entire post on the parks and green spaces throughout Buenos Aires.

Some of our favorite parks included Buenos Aires Ecological Reserve, a massive reserve in the heart of the city; Parque Thays most notable for its Nude Male Torso sculpture by Fernando Botero; Floralis Genérica a.k.a. the tulip sculpture made of steel and aluminum; Buenos Aires Botanical Garden in the Palermo neighborhood and the Japanese Gardens.

Knowing that spring is still many, many weeks away in Boston, made walking through these parks and being outside everyday an extra special treat.

If you enjoy art and are looking to do something a little different I’d recommend checking out the guided walking tours of Buenos Aires graffiti art. We signed up for a 3 hour walking tour through different neighborhoods in BA and it was really fascinating. The tour guides tell you about the individual artists, their backgrounds, trademark techniques that have helped distinguish them.

If you’re interested in learning more you can check out the tour guides website and the various tours they offer at graffitimundo.com.

While there are many fantastic restaurants in Buenos Aires, Sergio and I did not indulge in any gourmet experiences. However we did return to B.A.’s famous Cafe Tortoni to indulge in an afternoon coffee and dessert. We really enjoyed the Four Seasons Buenos Aires lounge, Pony Line. Thanks to a tip from a bartender there we were directed to a subterranean bar about 3 blocks away in a Flower & Wine shop called Floreria Atlantico where you enter the basement bar through a fake refrigerator door (see Sergio in photo above).

Despite being disappointed that we didn’t see everything I had hoped, I know I’ll be back to Buenos Aires. It is an amazing city and one to add to your bucket list.

Like Loading...
This entry was posted in Travel and tagged BosGuy, Boston Guy, Travel. Bookmark the permalink.