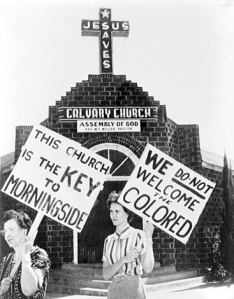 Earlier this week several prominent LGBT blogs wrote about the Movement Advancement Project (MAP) report that suggests the Religious Freedom Restoration Acts passed in 21 states (and counting) will define the new battle lines in LGBT rights in the US.

With marriage equality mostly settled, religious conservatives are claiming their “religious freedom” has been violated and are looking to create exemptions to discriminate against LGBT people. Cultural conservatives through out the 20th century have used “God” and “The Bible” as reasons to oppose and violate laws including a women’s right to vote, civil rights and interracial marriages.

“Almighty God created the races white, black, yellow, malay and red, and he placed them on separate continents. And but for the interference with his arrangement there would be no cause for such marriages. The fact that he separated the races shows that he did not intend for the races to mix.”
-Judge Leon M. Bazile, January 6, 1959

A rash of  RFRA’s that increasingly target the LGBT community have been passed recently (e.g. Indiana RFRA law which ultimately was rolled-back – in part). Signaling cultural conservatives are looking to use these acts and the courts to institutionalize discrimination under the pretense of “religious freedom”.

Since the start of 2015 lawmakers in 17 states have introduced religious exemption proposals in response to the spread of marriage equality. Below is an image that MAP shares in their report. Select their link above to learn more. 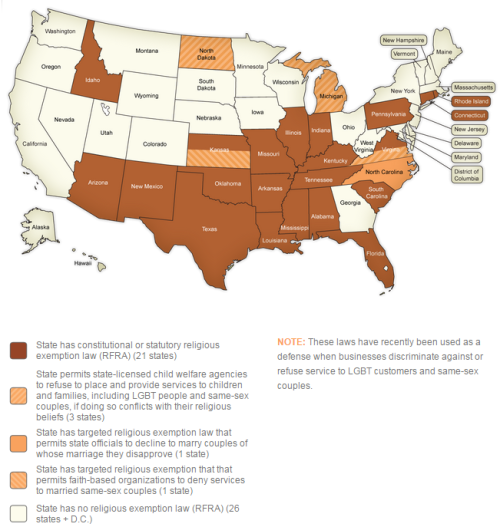 Like Loading...
This entry was posted in Gay, Poltics and tagged BosGuy, Boston Guy, Politics. Bookmark the permalink.