Last month, after spending two weeks visiting Argentina, we hopped on a 90-minute ferry from Buenos Aires, Argentina headed for Colonia del Sacramento, Uruguay. Situated in the southwest corner of Uruguay, this pristine town is best known for its historic quarter which is a UNESCO World Heritage Site.

Since 1828 Colonia del Sacramento has been a part of Uruguay but it was hotly contested by the monarchs of Spain and Portugal, exchanging hands more than a half dozen times since the 1600s. The city was even briefly a part of Brazil.  Colonia del Sacramento makes for a great day trip from Buenos Aires, but if you’re going to spend a night, I’d recommend where we stayed, Hotel Charco, which is situated in the middle of old town with views of the water.

After spending a night we were ready to hop in our rental car to get to our real destination and fun in the sun at Uruguay’s famous Punta del Este. The drive from Colonia to Punta was easy but further than I realized (approximately 3.5 hours). It gave us a glimpse of Uruguay, which seemed to be mostly farm land with an occasional vineyard. Note that the drive from Puna del Este to the capital, Montevideo is much shorter (about 90-minutes).

Punta attracts travelers the world over but it is mostly a summer playground for well-to-do Argentinians and Brazilians. If you’ve seen photos of Punta del Este it was most likely of the giant beach sculpture La Mano or Casapueblo, the onetime home of Uruguayan artist Carlos Páez Vilaró, which is now a museum, restaurant and hotel.

We opted to stay about 20 minutes outside of town in Maldonado, after a friend recommended a gay-owned hotel called Undarius. The owners, Fran and Mario a Spanish / Uruguayan couple are friendly and fantastic hosts. The tiny hotel has beautiful grounds with a pool and jacuzzi and the gay beach is about a 5 minute walk from the hotel. One big surprise was the ocean temperature. I had no idea the South Atlantic could rival the temperatures of Cape Cod. Having said that, it was still sad to leave this little beach haven, but I’d really like to return. 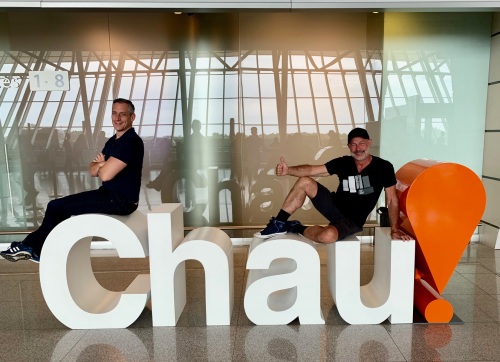 Like Loading...
This entry was posted in Gay, Travel and tagged BosGuy, Boston Guy, Gay, Travel. Bookmark the permalink.