While the weather outside hasn’t been exactly frightful it has hardly been warm and sunny either. However, it is exactly the weather one should expect in New England this time of year and following the Thanksgiving holiday many neighbors started decorating.

The main difference between the decorations you see in the suburbs vs. the city come down to space; there is no yard in the city, lights (for the most part) are used with restraint and since few people own an entire building you rarely see an entire Bowfront Victorian decked out.

However, what residents lack in space they more than make up for by decorating their entries, doors and windows. I captured a handful of photos after a walk around the neighborhood.

This week Jeff will again be speaking on behalf of GTI at a Virtual Abutters Meeting on Thursday, December 10th at 6PM, seeking approval for the transferance of two all-liquor licenses for these properties. Jeff shared some preliminary sketches of the proposed Asian restaurant, Pho on Thayer that included decor, layout and design. I assume no plans have been created for the Power Station since none were shared but you can check out the progress on Instagram, here.

If approved, both projects would bring life to commercial space that has been mostly vacant and unused. However neighbors had questions about noise and traffic at last week’s EBNA meeting. If you live in the neighborhood and have questions about either project you can join the Virtual Abutters Meeting (info below).

The South End Business Alliance (SEBA) and South End Local have partnered to create a “multi-date” 2020 Holiday Stroll and with so many local and small businesses struggling I’m hoping more people will come out to buy local this year and show the South End businesses some love.

More than 90 local businesses and working artists will be opening their doors (of course there will be strict adherence to state guidelines and everyone must wear a mask and observe social distancing protocols).

Despite the ongoing pandemic, economic downturn, and social unrest, many of my neighbors in the South End are spreading holiday cheer with their creative fall and Halloween decorations.

The fall is always a beautiful time to be in Boston and this year’s efforts by my neighbors to embrace the season is appreciated by me and I’m sure many others. Below are some more photos of the creative expressions shared by neighbors embracing the fall and Halloween season. Take time to walk around the neighborhood and check out their creative decorations.

At the height of the coronavirus epidemic in Massachusetts The Acquitaine Group Italian restaurant, Cinquecento, which was closed due to a statewide shutdown to flatten the curve with COVID-19 infections was flooded with approximately five feet of water from a water main break on Harrison Avenue.

Since the mid-April flood there has been a lot of activity to make the building (and surrounding buildings) habitable again but earlier this week the successful Italian restaurant with the beautiful patio announced that they will not reopen. Below is a photo of  me at their Rosso Container Bar on their beautiful patio. 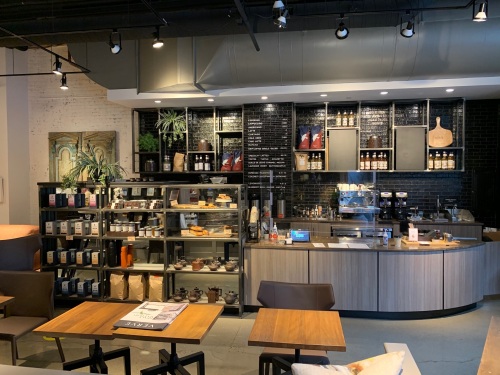 However, since I  first wrote about this European-style coffee bar a lot has happened and I wanted to remind people about this great little cafe which may not be on your radar. Since reopening after the coronavirus lockdown, the cafe has updated its menu adding items like Iggy’s bagels (which yours truly just devoured) avacado toast and for those who like sweets some very tastey cookies.

At the moment MOD Espresso, is giving away their delicious cookies with the purchase of a coffee so for a little more than $2.00 you can get a great cup of coffee and a cookie (I’m partial to their oatmeal raisin).

Get your tickets to the Taste of the South End

This is my favorite food tasting event in Boston. Sergio and I started attending “The Taste” nearly 20 years ago when I was working at AIDS Action and it continues to be one of my favorite charity events to attend and support.

For one night in March, AIDS Action brings together 40+ South End restaurants for a delicious evening of bite-sized servings, live cooking demonstrations, silent auction, as well as wine tastings and beer sampling. Tickets have been on sales since late last year so if you’ve yet to purchase your tickets don’t delay since the event generally sells out before the night of the event.

For more information and to purchase tickets, visit tasteofthesouthend.org.

Welcome to the South End’s newest coffee shop, Mod Espresso, by stopping by and sampling some of their delicious La Colombe coffee. It is a personal favorite.

The chic cafe sits inside the Modern Relik home design showroom located at 485 Harrison Avenue. The European-style coffee bar, was developed by Michela Larson who locals may remember opened the very popular (and still missed) Italian restaurant, Rocca, in the South End. 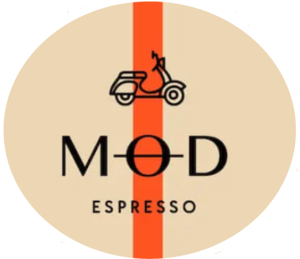 In addition to serving excellent coffee, Mod Espresso has a limited menu that includes sweets like cookies, cakes and pastry as well as some savory bites you can grab for lunch or snacks. The cafe will be expanding their hours in the weeks that follow but is currently open 7-days a week. Check out some photos of this chic new coffee shop on Harrison Avenue, courtesy of the Mod Espresso Cafe. A new residential development has been proposed for 566 Columbus Avenue. The building which sits at the busy intersection of Mass and Columbus Ave was purchased earlier this year by New Boston Ventures, and the new owners have proposed redeveloping the site into a new six-story mixed use commercial and residential building (rendering shown above).

The proposed project (currently unnamed) would feature a community oriented ground floor with approximately 5,000 sf of commercial space that would include a social enterprise café with outdoor seating, an art gallery, and improved community space for the United South End Settlements, which has been in the existing building since the mid 1970s.

The proposed project would include 66 residential home ownership units, 11 of which would be reserved for artist live/work spaces, as well as 42 below-grade parking spaces. The proposal would seem to make much better use of the space as it exists today (see below). 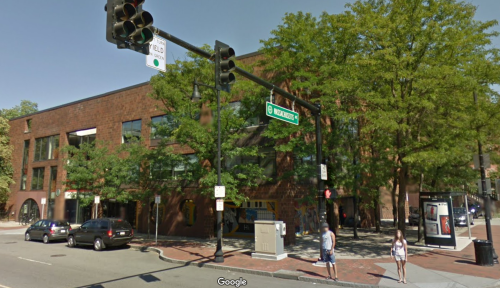 Photo of La Canular in the South End from Boston Magazine

The former home to Sister Sorel reopened this past Wednesday as Le Canular, the South End’s newest wine bar. According to the article in Boston Magazine the wines will all be priced at $13 and there will be a limited menu that you can check out Wednesday through Saturday from 6 p.m.-midnight.

I’m happy to see the space reopen and wish Maslow and his team much luck. While I’ve enjoyed the food at its neighboring Whaling in Oklahoma, I still can’t shake the feeling that I’m sitting in Tremont 647. I hope the transformation from Sister Sorel to Le Canular is more successful.

Boston Magazine recently featured an article about a new Mexican restaurant that will open inside the Revolution Hotel. Cosmica Mexican Eatery & Bar will focus on “inventive Mexican street food” and include items like chorizo-queso jalapeno poppers and duck carnitas tacos with mole verde – sounds delicious.

The new restaurant will be managed by the successful Wildlife Hospitality team, who also run The Beehive in the South End and Harvard Square’s Beat Brew Hall. Although the article didn’t mention a live entertainment license, I would bet you can expect Cosmica to offer live music. The hotel pays tribute to Boston’s rich music history and it would be only fitting that this new venue help the city’s current generation of musicians thrive.

Cosmica currently says they expect to open in November, but after taking a quick walk by the property this past weekend, it looks like a lot of work still needs to be done so we will see. Stay tuned.

The title of this blog post was my response to Mark Bruso’s recent article in the Boston Business Journal, that asks that question. His article focuses on several reasons why he believes the South End is Boston’s next big thing.

He points out how centrally located the South End is as well as its proximity to major interchanges. Bruso further asserts that the South End is home to a highly skilled workforce (more so than any other downtown neighborhood) with “79% more healthcare workers and 52% more management professionals than the next best neighborhood”. Moreover, the neighborhood is projected to see a boom in office market space, that is expected to double over the next five years due to three developments: 80 East Berkeley St, 321 Harrison Ave and the huge BMC Exchange that will replace Boston’s Flower Market. 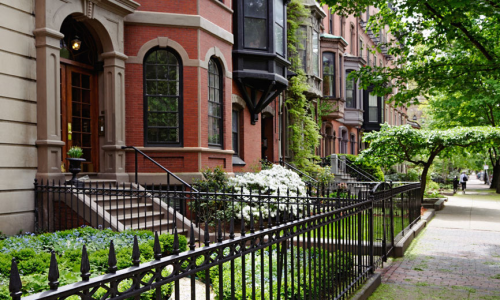 Unlike the near universal criticism leveled at the Seaport, which is defined by buildings best described as unimaginative, glass boxes with few public spaces – the South End maintains a distinctive look, known for its 19th century Victorian Bowfronts, Renaissance Revival, Italianate and French Second Empire row houses as well as beautiful parks and converted brick mills housing artists, small businesses and residences. But his most compelling argument in my mind really is the livability and quality of that life. He points out that this tiny downtown neighborhood is home to more than 120 eateries and 25 bars – making it a mecca for young professionals.

I agree with all of Bruso’s assertions and hope that if development does indeed take off the City will use those appealing traits outlined in his article to insist that developers make greater investment in building affordable housing (in this community), space for small businesses to thrive and better public transport.

You can read the full article from the Boston Business Journal, Is the South End Boston’s next big thing? 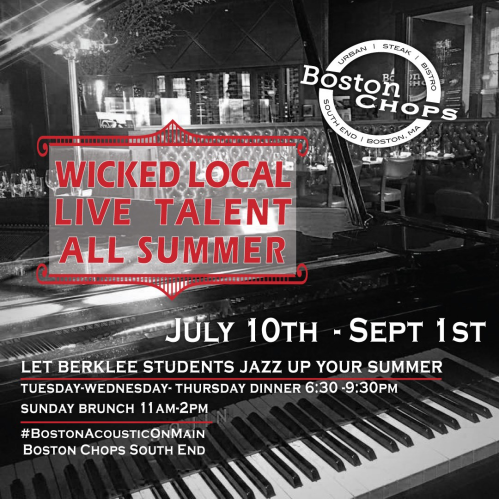 Have you heard? Boston Chops, one of my favorite places to grab a drink, has kicked off their summer live music series.  Starting earlier this month and running through September 1st, each Tuesday through Thursday and on Sunday for brunch Boston Chops South End will have live music.

Grabbing a drink after work during the week has suddenly become a lot more interesting. Definitely swing by and check out Boston Chops during their “Wicked Local Live Music” series. 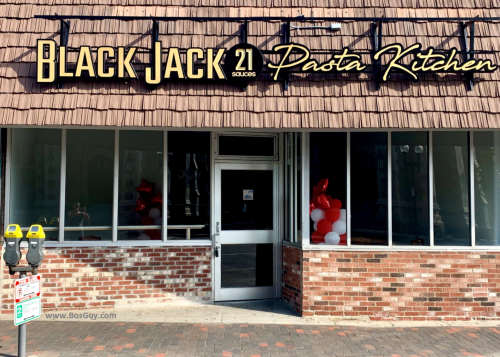 Last Monday Black Jack Pasta Kitchen opened in the space formerly occupied by Morse Fish Co. at 1401 Washington Street. Their opening continues a trend of more affordable take out dining options that have been popping up through out the South End over the past 2-3 years.

Their menu is very approachable with hot and cold subs ranging from $8-$10, choose your own pastas range from $11 – $15 depending on your sauce and toppings and larger entrees range from $14-$16.

The menu provides a nice compliment to Union Pizza which is next door and recently opened after the Greek sub shop, Harry O’s closed. I’ve yet to try the food at Black Jack Pasta but their  pasta, subs & garlic bread reviews on Yelp seem decent and will likely be a popular place for grabbing a quick dinner.

Heather and Colin Lynch of Bar Mezzana, Shore Leave, No Relation, and the soon-to-open Black Lamb brasserie on Tremont Street in the South End

The team behind the popular restaurants Bar Mezzana and Shore Leave / No Relation will be opening a third restaurant in the South End called Black Lamb in the space previously occupied by Stephi’s on Tremont Street, that closed earlier this year.

Located at 571 Tremont Street in the heart of the South End, Black Lamb is described as an “American brasserie” and will serve lunch, dinner, and weekend brunch. Although there are few details about the new restaurant, plans are for it to open later this summer.

You can follow their progress on their IG account, @blacklambbos.  More information about Black Lamb from EaterBoston here.